(After) Thoughts on Central Banks, Monetary Policy and Credit Intermediation

“Today’s central banks typically affect asset prices through primary dealers, or big banks, to which they provide liquidity at fixed prices—so-called open-market operations. But if these banks were to become less relevant in the new financial world, and demand for central bank balances were to diminish, could monetary policy transmission remain effective?” – Christine Lagarde (2018)

The financial system globally plays an important role in transmitting monetary policy to the real economy. Whenever a central bank adjusts its policy instruments, it relies on various financial intermediaries to translate the monetary change into the financing conditions for firms and households.

This inevitably brings us to the importance of bank and non-bank finance in the economy.

Non-bank financial intermediaries have steadily gained non-negligible market share, across various sectors, since their genesis. ] Progressively, a growing number of these firms are adopting market finance to satisfy the demand for credit. For central banks, it is crucial to understand how these developments matter for the transmission of monetary policy.

Specifically in Australia, concentration and distribution of non-bank finance operate between the short-term and medium-term interest rates, with many being pegged to the  Bank Bill Swap rate (BBSW).  The relative role of non-bank finance (and bank finance, for that matter) varies markedly across geographic locations, sectors and firm sizes, and affects parts of the Australian economy unevenly.

So how relevant is non-bank finance for monetary policy in Aus? Let’s investigate.

Non-banks have taken on substantial duration, liquidity, and credit risks on their balance sheets. Increased risk-taking can give rise to liquidity mismatches and affect the capacity of non-bank financial entities to absorb losses in a downturn. This has the potential to create systemic risk, impairing the monetary policy transmission mechanism.

Conversely, the credit activities of alternative lenders have several potential benefits. Firstly, the entrance of non-bank competitors leads to more competition and diversification in the financial sector. Secondly, a larger role for super funds and other institutional lenders lowers the need for maturity transformation in the market and could lower funding problems and systemic risks. Thirdly, as nonbank mortgage lenders have a limited amount of funds, they could/can only lend only if “the deal stacks up”. 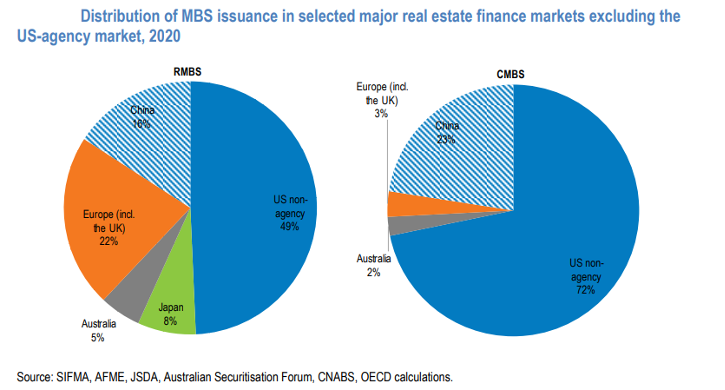 Outstanding Mortgage-Backed Securities (MBS) totalled USD$13 trillion globally in 2020, with the outstanding US Residential MBS market remaining the largest, totalling USD$9 trillion. All the while, according to AUSTRAC data, there are now more than 600 non-bank lenders, making up around 7% of all debt financing in the country.

So, to answer the perennial question – how relevant is non-bank finance to monetary policy?

Australia remains a bank-based economy, but the rising prominence of non-bank finance has important ramifications for the transmission of monetary policy. Despite significant cross-state/geography/sector heterogeneities in financing structures persisting the rise in non-bank finance has been largely immune to policy. Yes, we’ve seen it respond to the real effects of policy, but the very structure of the non-bank lending sector has been unresponsive -even during heightened periods of financial stress.

Durations and other consequences of rising interest rates

Durations and other consequences of rising interest rates